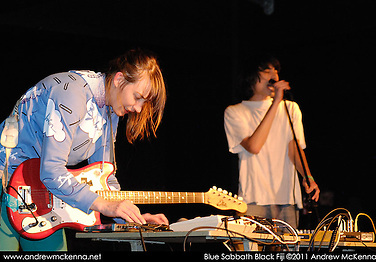 I’m later than I aimed to be today, missing all the pre SWG3 festivities after being distracted by the Scotland game of course, and after that all too familiar feeling of being cheated (well for the majority, I’m not technically Scottish, but would like to see them qualify as much as anyone) it’s time to feel anything but due to an intriguingly diverse and exciting line up put together by two of Scotland’s best independent promoters, Cry Parrot and Tracer Trails.

As I wander into SWG3 Alasdair Roberts is already most of the way through his set and while I’m still coming to terms with the trek down he provides some delightful folk tones to set a nice settled mood before the riot commences. It has to be said that Cry Parrot and Tracer Trails are very different in the acts they tend to book the former typically going for acts at the noisier end of the scale while the latter usually leans more to the quaint pop sensibilities, obviously they both can’t be pigeon holed that easily but the mixture of acts they have brought together brings a refreshing touch to this event. 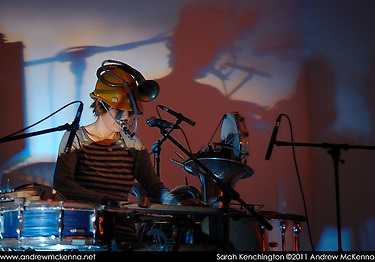 Next up is arguably the act of the day Sarah Kenchington and the early highlight delivers a mesmorising set on her almost nightmarish contraption operated by bicycle pedals. At times she touches of creepy sequences that send shivers down your spine while pulls together a collection of brass and electronic noises to a surprisingly tuneful melody while the addition of vocals toward the end lift the set that extra bit and leaves the dazed but settled crowd sad to see her go.

Two Wings come on next but their rather ’60s folksy tones don’t quite live up to the early heights so I wander off to satisfy my complaining stomach with a meal at one of the event’s recommended food establishments, Banana Leaf. After enjoy some delicious traditional south Indian cuisine I return just in time to catch the ear piercingly loud post punk start of Gummy Stumps who deliver ferocious, charismatic tracks to a more than healthy turn out as the evening takes a turn for the louder which continues for pretty much the rest of the evening.

Ultimate Thrush next and clad in bed sheets quickly set about ripping the place up and whipping the crowd into a frenzy, throwing themselves about with no care as they attack us with their break neck take on hardcore. Blue Sabbath Black Fiji are another act you argue are a highlight of the day as the noise duo execute their non stop barrage of sound to perfection in what is the biggest and easily the most impressive show I’ve seen them in.

Vom bring a touch more harmony, I stress only a touch, as they push through a set of grunge tinged, cosmic rock before the whole crowd hits the dance floor for the last act of the night and another of the evening’s highlights Ben Butler & Mousepad. While this may a be a slightly odd end of the evening considering the acts BBMP is following but that does not mean he is lacking in anyway, in fact this is probably the most entertaining set of the evening as the man and his electronics sets the whole room dancing with tunes that go from 80’s TV themes to dubstep in a matter of seconds and could easily translated to of from your favourite childhood video game in a blissfully addictive end to a wonder first day.